We are expecting to see a Player of the Month Michail Antonio SBC land in FIFA 22 on Friday, October 1st.

Judging from previous FIFA releases, we can expect the challenges to remain active for a period of four weeks, which would see Antonio go off the servers on Friday, October 28. 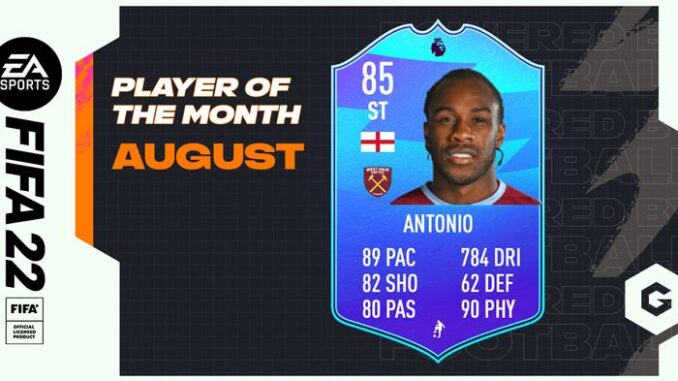 As the card has yet to be officially released, we’re still not sure what EA will ask for in terms of its squad requirements.

We’d recommend investing in some of the 83/84 rated Premier League players that are under 5,000 coins. These include:

Here are our predicted stats for the forward:

EA has announced the release date and start time for the FIFA 22 Web App with fans able to login and download on mobile very soon. What Time Does The Fifa 22 Web App Come Out? The release […]

FIFA 22 is racing into another week of new cards in Ultimate Team, starting with a new batch of Team of the Week players. So, here are our FIFA 22 TOTW 5 Predictions . FIFA […]

FIFA 22: Web App login release date and how to download on mobile

EA has announced the FIFA 22 Web App release date and fans will soon be able to login as well as download the Companion application for mobile. This trial will allow fans to play the entire game […]