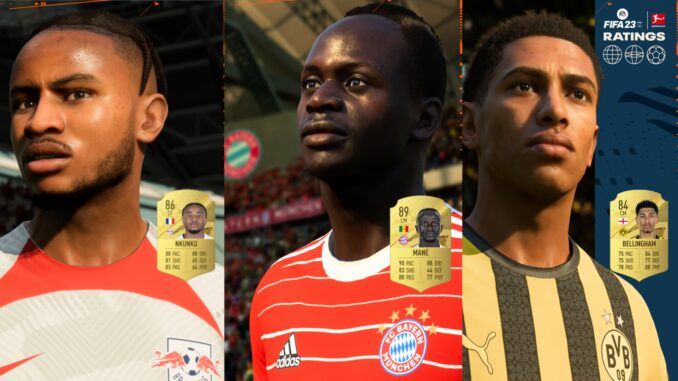 Who is the best Bundesliga player on FIFA 23?

Bayern Munich goalkeeper Manuel Neuer is the highest rated Bundesliga player with an overall rating of 90.

The German number 1 has consistently been considered one of the best goalkeepers in world football over the last decade and has won an incredible 10 Bundesliga titles with Bayern.

You're in for a treat 🍬
Here's everything new coming to gameplay in #FIFA23:

Check out the list below for the top 25 FIFA 23 Bundesliga player ratings with Club & Position:

EA Sports previously announced that FIFA 23 would be released worldwide on Friday, September 30, 2022, but it seems that some Xbox users were able to download and access the Xbox One version of the […]

How to complete the FIFA 23 Pre-Season Batch 1 Player Pick ?

FIFA 23 Pre-Season Batch 1 Player Pick is now available as a repeatable SBC to fight for the final promotion of the FUT 22 cycle. The SBC is repeatable and available until next Friday, August […]

The FIFA 23 Pre-Season Lot 2 Player Pick was released on September 2 as a repeatable SBC during the FIFA 22 Final Calendar Year promo. The Batch 2 player pick expires in a week, but […]