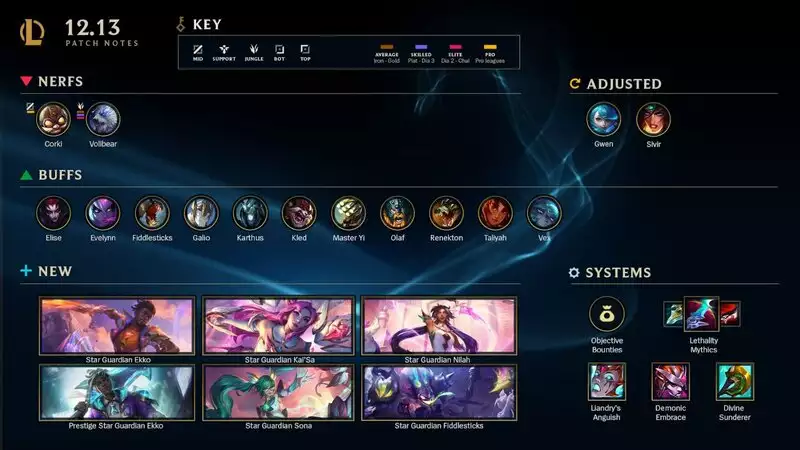 Riot Games have announced the complete patch notes for the forthcoming 12.13 League of Legends update that is set to release on 13th July 2022. This new update includes a brand new Champion, mid-scope updates for Olaf and Sivir, and various other quality of life changes.

Joining the fray on 14th July will be Nilah, the Joy Unbound, with her water-based abilities that will solidify her place in the Star Guardians.

Here is a full list of the 2022 Star Guardian skins coming to League of Legends,  Legends of Runeterra and Wild Rift:

Here are all of the artists involved:

[c] Gwen has been one of the premiere top laners since MSI, and the Durability Update only increased her
strengths. Even after her nerfs in 12.11, she’s still a cut above the competition, especially when it comes to
Pro Play. We’re snipping some power out of her Pro-skewed abilities like her E and W to patchwork it into
some more accessible parts of her kit. These should net out in a nerf to Pro Gwen and a buff to her in
Average and Skilled levels of play.

[s] Q AD scaling increased. W cooldown decreased at all ranks.
[c] Kled’s been fulfilling his role as a lane bully quite well, but he hasn’t been able to capitalize on his
advantages to be a terror outside of top. We’re buffing the Cantankerous Cavalier to help make him a bit
more of a dangerous presence in the later stages of the game.

[c] Adding Regional Transfer Rank Preservation. If you transfer your account out of a region and back to that
region within two weeks, your account’s ranked state upon returning to your original region will be restored
to what it was when you left. This is intended to curb some region-transfer rank abuse we’ve been seeing
and also means you won’t have to re-do your ranked climb if you take your League account with you on a
quick vacation.

Diablo 4 pre-registration for the beta, release date, Trailer and Gameplay

Madden NFL 23 Closed Beta: Release date and How to Get Access ?