Why is it that some steaks taste like sun-dried cardboard, while others are dripping with flavor and have the texture of warm butter? It’s not that difficult a question to answer, is it? The finest food needs ingredients of the best quality, prepared in a skillful way that doesn’t hide the natural goodness. And so it goes for loudspeakers too – no one ever made a great one with sub-par drive units and cabinets that weren’t fit for purpose. But just like steak, even a good speaker can be ruined if it isn’t cooked properly, or is badly served. Of course, if it doesn’t use the right raw materials in the first place, it can never be right.

That’s why Focal’s announcement that it is using a different cone material in its new Aria 926 speaker is more significant than you might first think. This French company has spent much time looking into drive unit cone materials over the years, and has used markedly different formulations to many of its rivals as far back as the eighties. The material that a cone is made from is critical, as it’s the contact point between the speaker and the air it is there to move. It affects the transient response of the driver (the ability to accelerate quickly to catch the leading edge of a note), its rigidity (the cone needs to behave like a piston, moving in and out without flex) and the resonance or lack thereof (the cone needs to be well damped so that it doesn’t color the sound). 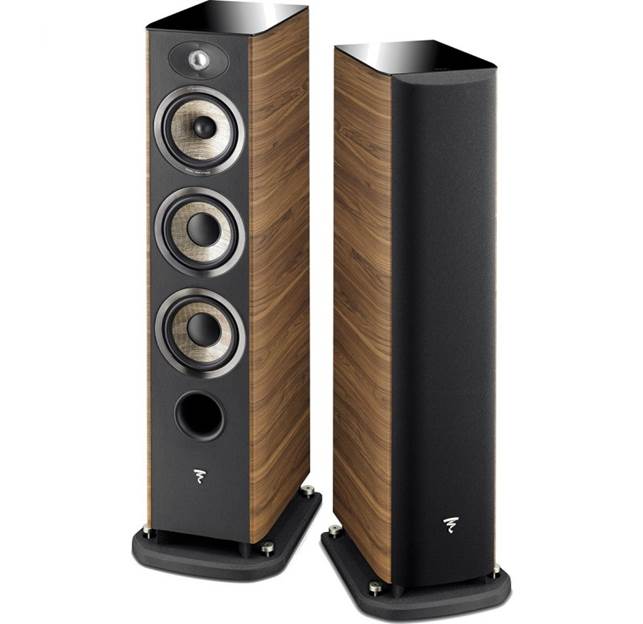 Focal has traditionally used Polyglass for its lower-end designs and W sandwich cones for its premium Electra and Utopia ranges. First launched back in 1985, the former comprised a cellulose pulp cone for good damping, together with a layer of glass microspheres in order to increase the rigidity. But the 900 Aria showcases a new recipe – the French speaker specialist has cooked up a sandwich of glass fiber, a special type of textile fiber called flax and glass fiber again. Flax is said to have been around since the fourth century BC, and used by the Egyptians as protective cloth for mummies, no less. As luck would have it, France is the main cultivator in Europe of flax fiber – principally in Flanders, Picardy, Normandy and the Pas-de-Calais region – and it is thought to be among the very best in the world. What the use of flax brings to the party is a way to damp the glass fiber; the latter material is very rigid and light (hence its popular use in sports cars), but it isn’t the most acoustically inert. Flax is, however, so the two should make a happy combination.

The Aria 926 is more than just some bass/mid drivers, however. It also sports new tweeters with phase- optimized crossovers, plus a more classic and timeless look for the cabinets compared with the Chorus 800 series it replaces. Specifically, the new TNF high-frequency unit uses an aluminium/magnesium alloy inverted dome for low mass and high stiffness supported on Poron suspension, which is said to aid linearity and fitted with a front plate waveguide for decent dispersion. The bass and midrange drivers get special injected Zamak baskets and Klippel optimized motor systems. This three-way speaker runs the tweeter from a claimed 28kHz down to 2.4kHz, where it crosses over to the 165mm midrange driver, then at 290Hz two 165mm woofers start to come into play. 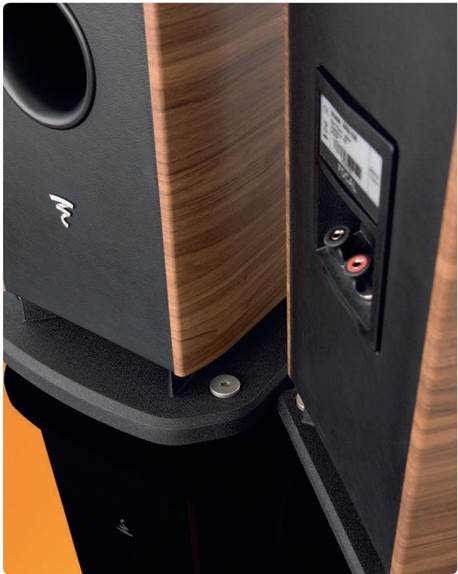 The Aria 926 is more than just some bass/mid drivers

Compared with the old 800 series, the new 926’s cabinets seem to have evolved just as much as its drive units. With a leatherette (PVC) finished front, real walnut veneered sides (gloss black is an option) and a glass top, this new loudspeaker presents itself well visually – as well as feeling rather classier than previous mid-price Focals. Although not as conservative as a Spendor A6R, for example, they’re a lot more grown up and less obviously ‘styled’ than before. The finish is very good, if not quite superlative, meaning these boxes will look classy wherever they are.

Inside the shell is a combination of 18mm and 24mm high-density fiberboard, with non-parallel sides and careful bracing. The cabs are loaded by a single bottom-mounted reflex port, and this works correctly when the supplied aluminium plinths are fitted. Inside, the midrange and treble sections have their own sealed enclosures with non-parallel walls to minimize internal standing waves. Round the back, single-wired binding posts are to be found. Overall, the new Focal presents itself as a thoroughly modern and sophisticated speaker, and also proves easy to drive with amplifiers of fairly modest power – including tube designs.

Round the back, single-wired binding posts are to be found