The mid-price separates market is hi-fi’s most competitive, so Marantz’s latest SACD player and integrated amp must be special to ensure the company’s future success

Some might say Marantz has achieved the impossible, pulling off the unusual feat of being a mass-market manufacturer while consistently making quirky and interesting products. As this SA8005 CD player and PM8005 amplifier combo shows, the brand is able to offer something just a little bit different from its mainstream $1,600 rivals.

Not only does it sound quite distinctive, it also features two-channel SACD playback – which is all well and good of course, but any modern self-respecting digital source and amplifier duo has to have DAC functionality these days. With this Marantz pair it comes via the SA8005 player rather than being offered on the amplifier; the PM8005 provides six line inputs with a nice MM phono stage thrown in.

These days it seems the only kind of digital input that matters is USB; this lets you play your PCM computer music files at up to 192kHz/24-bit resolution. The SA8005 has a twist though; like many of the latest crop of machines it also plays Direct Stream Digital (DSD), which is of course the native coding system for SACD.

Some folk think that DSD sounds better than PCM; SACD fans certainly do, and now we’re seeing some action from its creator Sony with the advent of DSD5.6. Effectively this runs at twice the data rate, giving (theoretically) superior sound. The SA8005 is one of the few machines currently on sale that is built for this, so one fine day, when enough music goes on sale in this format, this machine will be chomping at the bit (‘scuse the pun) to play it. Until then, if we’re honest, then its performance on CD, SACD and at 96kHz/24-bit is what really counts, as this is where the vast majority of digital music can be found. 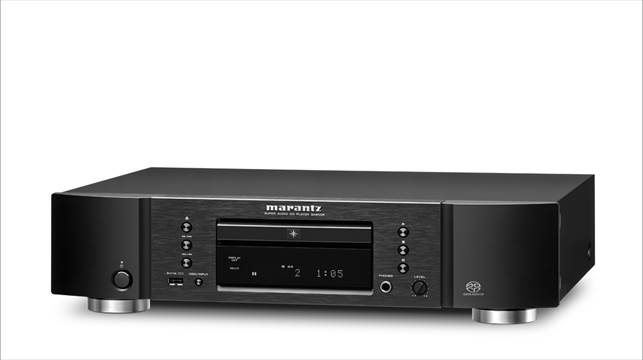 The player is pretty well made for a one thousand pound design. For example, the chassis is strengthened with an extra metal plate to cut case resonance, making for an 8kg machine which feels sturdier than price rivals such as the $2,080 Roksan Kandy K2. The USB DAC circuit also sports a special (galvanic) ground/signal isolation system designed to remove computer¬borne noise, Marantz says.

As per all rivals these days, the SA8005 works in asynchronous mode, clocking the computer’s audio stream for lower jitter. Mac users needn’t bother, but PC owners will have to install a driver to enjoy music from their computers. Inside, a Crystal Semiconductors CS4398 digital filter, noise shaper and DAC chip does the number crunching, and it feeds an analogue output stage using Marantz’s proprietary HDAM op-amp modules. 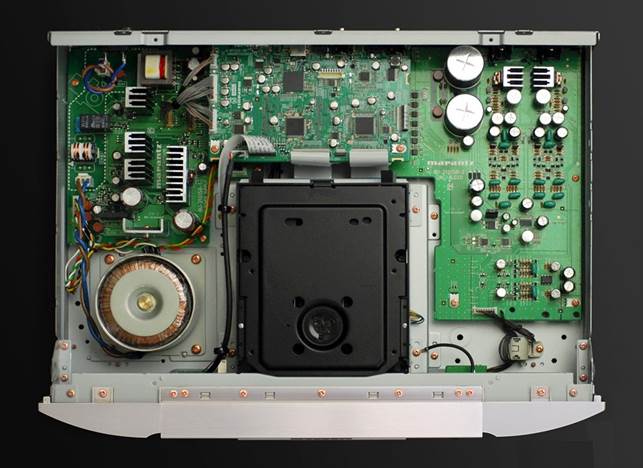 Every good $1,600 digital source needs an integrated amplifier to live happily ever after with, and to this end Marantz has come up with the new PM8005. It’s the more conservative of the two products, offering a claimed 70W per channel into 8ohm, but no fancy DAC functionality. Oddly though, it does have three tone controls instead of the usual two.

Yes, this integrated gets a midband level control, which isn’t likely to be top of most people’s shopping lists for a thousand pound amplifier I’d suggest – not least because at this level customers tend to like to switch the tone controls out altogether. Inside, there’s a large double-shielded toroidal power transformer that sits on a triple layer bottom plate, investing this amplifier with real sturdiness and weight.

Marantz has paid attention to individual component selection with Schottky diodes and other componentry; the company’s proprietary second and third generation HDAM amplifier modules are used, and there’s a discrete input buffer circuit.

As a pair, this Marantz combo is very pleasing to use. The brushed metal finish is excellent, the action of the controls slick and the overall feel is of a high-end package. It has just the right amount of features to keep most users happy, without cluttering up the fascias to the extent that they’d look gauche. The main omission is a Bluetooth input; many purchasers won’t see this as a problem but rivals like Roksan’s $2,030 Kandy K2 BT could steal some sales here. There is, however, discrete headphone amplifier circuitry.