First, taken in isolation, both machines present a very fine face to their respective rivals. The SA8005 is a big, confident- sounding silver-disc player, which gives a slightly warm and rose-tinted view of the world. No matter what disc you feed it, you can be sure that it will deliver the music in a bouncy, enjoyable way. The soundstage is curtailed slightly in absolute terms, the Marantz pulling in things from far left and far right to make a stronger, bigger – almost larger than life – central image between the speakers. You could almost say it’s like a classic tube amplifier.

Tonally the SA8005 is slightly dull, albeit in a nice way. The upper bass of Thomas Dolby’s ‘Airwaves’, from The Golden Age of Wireless [EMI CDP 7 46009 2], is more fulsome than it should be, but at the same time the lower bass is a little softer and lighter. Moving up into the midband, the player sounds warm and smooth, and further still, treble is sweet but a little lacking in sparkle and extension. The overall effect is of a disc player that seeks to sugar the pill somewhat – it’s not dramatic, but certainly errs on the side of euphony rather than absolute neutrality.

Given the typical buyer of a $1,600 machine, this won’t be wholly unwelcome: for at this price point it’s all about giving a nice, impressive sound rather than performing a CSI-style forensic study of the scene of the recording.

Interestingly, you’d have thought the PM8005 would be just a touch more neutral, given the warming tendencies of its partnering player, but it is not. Dub Pistols’ ‘Gangsters’, from Speakers And Tweeters [SBESTCD16], showed it to have a strong and deep bass by the standards of its price rivals – although it isn’t as taut and well damped as the similarly priced Creek Evolution 50A, for example. It certainly sounds bigger and more impressive, but again is less accurate, yet proves in some ways more fun.

The amp has pre-out and power amp direct sockets, plus RCA inputs and binding posts for two pairs of speakers

The PM8005 has less upper bass warmth than the SA8005, but is fractionally fuller down in the bottom octave; it gives a very confident sound, apparently untroubled by any lack of power, and again makes the rhythm zip along and everything flows beautifully. Move up to the midband and the PM8005 pulls back a little – it’s not as direct as some, nor is it as transparent. This isn’t to say it is opaque, it’s just that it’s been given quite a ‘stylised’ sound.

The upper mid and low treble is shiny and well defined, but a little lower down there’s less intensity to the sound. This is great with reggae, for example – Gregory Isaacs’ ‘Night Nurse’, from Night Nurse [Island 314 586 768-2], was consummate fun, the Marantz amp seemingly having a big smile on its face!

Again, the PM8005 just got into the groove, preferring not to focus too much on soundstaging, image location, depth perspective and the like, and just serving a big, punchy, sound with a good deal of sparkle to snare drums and hi-hats. It presents like a quintessential big Japanese transistor amp – all thunder and lightning – but is far more musical than many.

So what of the two together? Unsurprisingly they do gel rather well. That slightly laid-back upper mid and treble of the SA8005 seems to be brought forward a bit with the PM8005’s more lively higher octaves, while the bass seems to work better than expected: the amp adds a bit of heft right down low as the source component warms the upper regions of the bass. 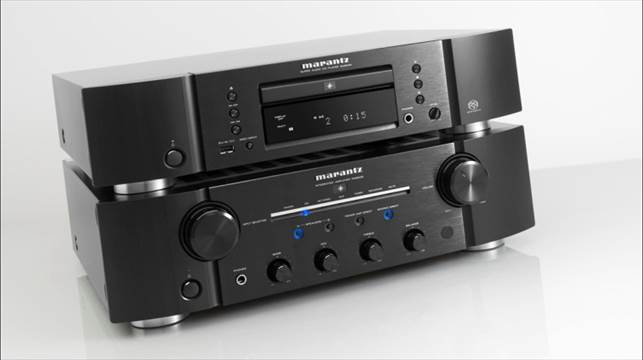 The result is a very big sound – it’s enormous compared to some, and has a wonderfully confident and naturally musical attitude. Whatever you feed it, whether it’s Wings’ Band On The Run in 24-bit/96kHz FLAC via an Apple MacBook Pro running Audirvana, Alex de Grassi’s The Water Garden via DSD [Blue Coast Records] or the Human League’s ‘Seconds’ on SACD, from Dare [Virgin SACDV 2364], this dynamic duo really takes control of the situation and boogies.

It’s only when you sit down and dissect the sound or do direct A-B comparisons with more expensive references, like the Marantz Premium range which inspired these 8005 products, that you begin to realise what it’s not doing quite so well.

Its weakness is a tendency to muddy things across the midband, smearing the bass slightly and lopping off some upper treble energy and finesse. While it’s very good at the little musical inflections that make things sound so satisfying, it does also sit on major dynamic peaks just a touch too much.

Finally, there’s a slight reduction of soundstage depth – but overall the Marantz SA8005/PM8005 pair proves a pretty hard act to beat at the price.