As a stateful firewall, Windows Firewall with Advanced Security can keep track of the state of packets as they travel across the network. Packets that match a specified rule can be either allowed or denied depending on how the rule has been configured. Windows Firewall with Advanced Security can inspect and filter both inbound and outbound packets, and it supports both Internet Protocol version 4 (IPv4) and version 6 (IPv6).

Windows Filtering Platform (WFP) is a collection of application programming interfaces (APIs) and system services that allow for the creation of network-filtering applications on Windows Vista or later. By using WFP, third-party developers can create host-based security tools such as these:

WFP is also the underlying engine used for implementing packet-filtering logic in Windows Firewall with Advanced Security. The components of WFP include the following:

Windows service hardening is implemented using strategies such as the following:

Network location awareness is a feature of Windows Vista and later that allows network-aware applications to change their behavior based on the computer’s network connectivity. The three network location types that a computer running Windows can detect are these:

Network location awareness is used by Windows Firewall with Advanced Security to determine which firewall profile will be used for protecting each connection on the computer. This is described in more detail in the next section.

If a computer is multihomed (connected to more than one network), each connection is assigned the appropriate network location type based on the type of network to which it is connected.

A typical day with an enterprise laptop might be as follows:

Examining the day just described for Bob, you can see that the following scenarios came into play:

Although the preceding example uses client systems, it’s also common for servers to be multihomed and connected to multiple networks in certain scenarios. For example, a clustered Hyper-V host in a production environment might be simultaneously connected to the following networks:

Multihomed servers are also common in edge scenarios where the server is connected to both the corporate intranet and the public Internet.

Windows Firewall with Advanced Security has three firewall profiles, which correspond to the three network location types on the Windows platform:

All three profiles can be active at the same time on a computer if Windows detects that there are network connections of each type present. You can view the status of each firewall profile on a computer by opening the Windows Firewall with Advanced Security Microsoft Management Console (MMC) snap-in. One way of doing this on Windows Server 2012 is by selecting Windows Firewall with Advanced Security from the Tools menu of Server Manager. Once the snap-in is open, select the root node in the console tree and examine the Overview section in the details pane.

Figure 1 shows an example of this for a computer that has only one network connection of the domain type. Note that all three profiles have Windows Firewall turned on for them, but only the domain profile is active. The reason the other profiles are turned on is so that if a connection to a private or public network is established on the computer, firewall protection will immediately be implemented for such connections. 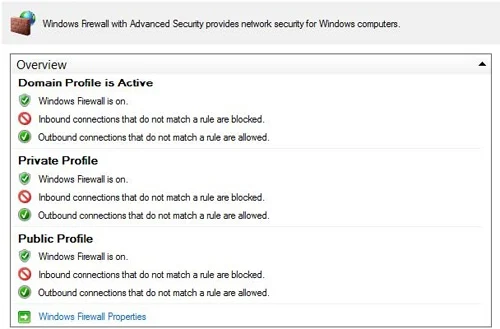 When creating a user in Active Directory, there are several user account related options that can greatly enhance network security via user authentication and encryption methods. The choices range from a simple password change at […]

The Impact of DNS on AD DS Problems with DNS can spell disaster for an Active Directory environment. Because all servers and clients are constantly performing lookups on one another, a break in name-resolution service […]