The Internet, as originally implemented, utilized a simple text file called a HOSTS file that contained a simple list of all servers on the Internet and their corresponding IP addresses. This file was copied manually from the master server to multiple secondary HOSTS servers. As more and more servers were added to the Internet, however, updating this file became unmanageable, and a new system became necessary.

In 1983, in direct response to this problem, the RFCs for the DNS were drawn up, and this form of name resolution was implemented on a large scale across the Internet. Instead of a small number of static HOSTS files, DNS servers formed a hierarchical method of name resolution, in which servers resolved only a certain segment of hosts on the Internet and delegated requests that it did not manage. This allowed the number of records held in DNS to scale enormously, without a subsequently large performance decrease.

Microsoft developed its own implementation of DNS in Windows NT 4.0, which was based on the RFC standards on which DNS was founded. With the introduction of Windows 2000, Microsoft adopted DNS as the principle name-resolution strategy for Microsoft products. Older, legacy name-resolution systems such as WINS are slowly being phased out. Since that time, the DNS implementation used by Microsoft has evolved to include a number of key benefits that distinguish it from standard DNS implementations (for example, UNIX BIND). To understand these improvements, however, you first need a basic understanding of DNS functionality.

Establishing a Framework for DNS

DNS structure is closely tied to the structure of the Internet and often is confused with the Internet itself. The structure of DNS is highly useful, and the fact that it has thrived for so long is a tribute to its functionality. A closer examination of what constitutes DNS and how it is logically structured is important in understanding the bigger picture of how DNS fits into Windows Server 2012.

DNS uses a hierarchical approach to name resolution in which resolution is passed up and down a hierarchy of domain names until a particular computer is located. Each level of the hierarchy is divided by dots (.), which symbolize the division. A fully qualified domain name (FQDN), such as server1.sales.companyabc.com, uniquely identifies a resource’s space in the DNS hierarchy. Figure 1 shows how the fictional CompanyABC fits into the DNS hierarchy. 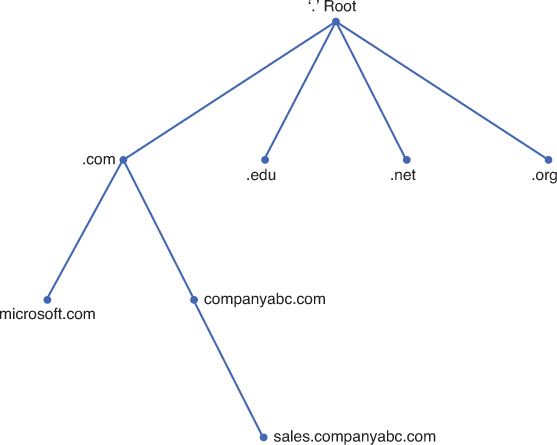 The top of the hierarchy is known as the root, and is represented by a single . (dot). Moving down the DNS hierarchy, the next layer in the model is made up of top-level domain (TLD) names, which are .com, .net, .gov, .fr, and similar domain namespaces that loosely define the particular category that a domain namespace fits into. The Internet Assigned Numbers Authority (IANA) oversees the global root zone management and management of the TLDs. The IANA is operated by the Internet Corporation for Assigned Names and Numbers (ICANN). The official list of all generic TLDs maintained by IANA is given in Table 1. 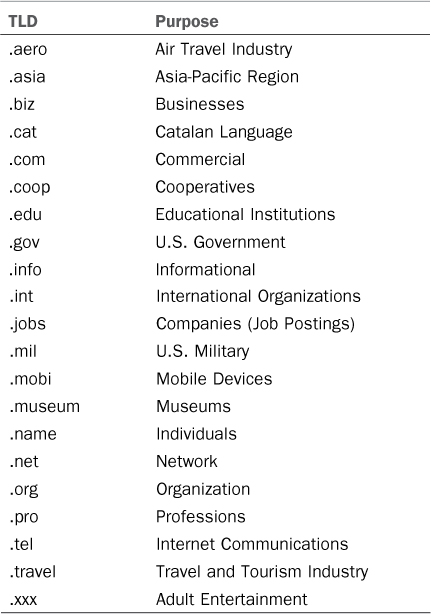 For example, educational institutions are commonly given .edu extensions, and commercial businesses are given .com extensions. These extensions form the first set of branches to the DNS tree. The .biz, .com, .info, .name, .net, and .org are all open TLDs, meaning any individual or entity can register the domains. Other TLDs have restrictions based on the intended use.

In addition to the generic TLDs, the IANA maintains country-code TLDs. These country codes are the two-letter codes specified in International Organization for Standardization (ISO) 3166 standard. For example, .co is maintained for Colombia and .fr is maintained for France. Interestingly, all the country-code TLDs listed in ISO 3166 are maintained, but some are unused, such as the Saint Martin (.mf). There are also a handful of exceptions, such as the listing for United Kingdom, which is listed in the ISO 3166 standard as .gb, but .uk is used instead.

Subdomains can easily be, and often are, created in the DNS hierarchy for various reasons. For example, sales.microsoft.com is a potential domain that could exist as a sublevel of the microsoft.com domain. The DNS hierarchy works in this way, with multiple levels possible.