1. Key Elements to Monitor for Bottlenecks

As mentioned, four resources compose the common set of resources: memory and pagefile usage, processor, disk subsystem, and network subsystem. They are also the most common contributors to performance bottlenecks. A bottleneck can be defined in two ways. The most common perception of a bottleneck is that it is the slowest part of your system. It can either be hardware or software, but generally speaking, hardware is usually faster than software. When a resource is overburdened or just not equipped to handle higher workload capacities, the system might experience a slowdown in performance. For any system, the slowest component of the system is, by definition, considered the bottleneck. For example, a web server might be equipped with ample RAM, disk space, and a high-speed network interface card (NIC); but if the disk subsystem has older drives that are relatively slow, the web server might not be able to effectively handle requests. The bottleneck (that is, the antiquated disk subsystem) can drag the other resources down.

A less-common, but equally important, form of bottleneck is one where a system has significantly more RAM, processors, or other system resources than the application requires. In these cases, the system creates extremely large pagefiles, has to manage very large sets of disk or memory sets, but yet never uses the resources. When an application needs to access memory, processors, or disks, the system might be busy managing the idle resource, thus creating an unnecessary bottleneck caused by having too many resources allocated to a system. Thus, performance optimization means not having too few resources, but also means not having too many resources allocated to a system.

Available system memory is usually the most common source for performance problems on a system. The reason is simply that incorrect amounts of memory are usually installed on a Windows Server 2012 system. Windows Server 2012 tends to consume a lot of memory. Fortunately, the easiest and most economical way to resolve the performance issue is to configure the system with additional memory. This can significantly boost performance and upgrade reliability.

There are many significant counters in the memory object that could help determine system memory requirements. Most network environments shouldn’t need to consistently monitor every single counter to get accurate representations of performance. For long-term monitoring, two very important counters can give you a fairly accurate picture of memory pressure: Page Faults/sec and Pages/sec Memory. These two memory counters alone can indicate whether the system is properly configured and experiencing memory pressure. Table 1 describes the counters necessary to monitor memory and pagefile usage. 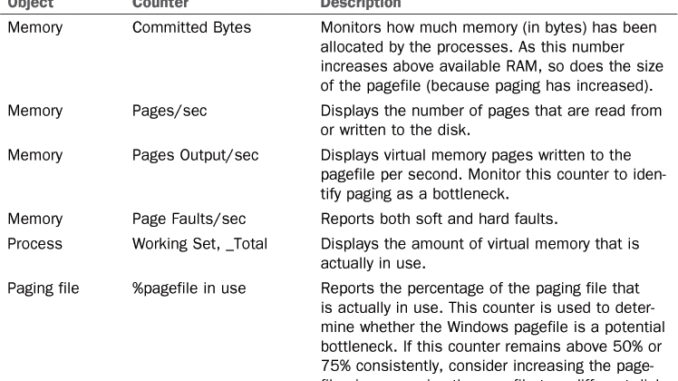 By default, the Memory tab in Resource Monitor, shown in Figure 1, provides a good high-level view of current memory activity. For more advanced monitoring of memory and pagefile activity, use the Performance Monitor snap-in. 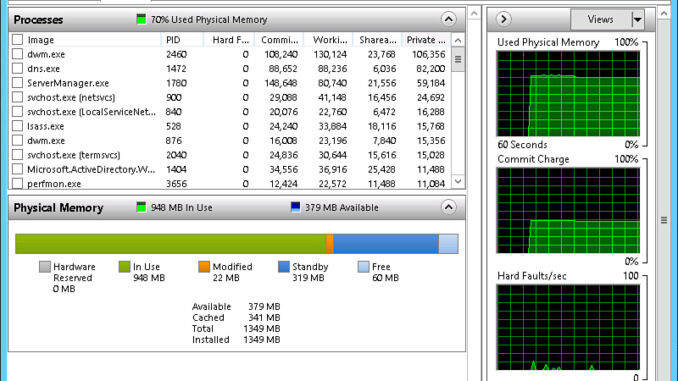 Systems experience page faults when a process requires code or data that it cannot find in its working set. A working set is the amount of memory that is committed to a particular process. When this happens, the process has to retrieve the code or data in another part of physical memory (referred to as a soft fault) or, in the worst case, has to retrieve it from the disk subsystem (a hard fault). Systems today can handle a large number of soft faults without significant performance hits. However, because hard faults require disk subsystem access, they can cause the process to wait significantly, which can drag performance to a crawl. The difference between memory and disk subsystem access speeds is exponential even with the fastest solid state drives available. The Memory section of the Resource Monitor in Performance Monitor includes columns that display working sets and hard faults by default.

The Page Faults/sec counter reports both soft and hard faults. It’s not uncommon to see this counter displaying rather large numbers. Depending on the workload placed on the system, this counter can display several hundred faults per second. When it gets beyond several hundred page faults per second for long durations, you should begin checking other memory counters to identify whether a bottleneck exists.

Probably the most important memory counter is Pages/sec. It reveals the number of pages read from or written to disk and is, therefore, a direct representation of the number of hard page faults the system is experiencing. Microsoft recommends upgrading the amount of memory in systems that are seeing Pages/sec values consistently averaging above 5 pages per second. In actuality, you’ll begin noticing slower performance when this value is consistently higher than 20. So, it’s important to carefully watch this counter as it nudges higher than 10 pages per second.

The Pages/sec counter is also particularly useful in determining whether a system is thrashing. Thrashing is a term used to describe systems experiencing more than 100 pages per second. Thrashing should never be allowed to occur on Windows Server 2012 systems because the reliance on the disk subsystem to resolve memory faults greatly affects how efficiently the system can sustain workloads.

System memory (RAM) is limited in size, and Windows supplements the use of RAM with virtual memory, which is not as limited. Windows will begin paging to disk when all RAM is being consumed, which, in turn, frees RAM for new applications and processes. Virtual memory resides in the pagefile.sys file or in specific application designated memory mapped files. The primary paging file, pagefile.sys is usually located in the root of the system drive and can be relocated or configured for performance reasons. Each disk can contain a pagefile. The location and size of the pagefile is configured under the Virtual Memory section, shown in Figure 2.

2. Click the System and Security category and then the System control panel

3. Click the Advanced System Settings link on the left.

4. When the System Properties window opens, click the Settings button under the Performance section.

Windows usually automatically handles and increases the size of pagefile.sys as needed; however, in some cases, you might want to increase performance and manage virtual memory settings yourself. Keeping the default pagefile on the system drive and adding a second pagefile to another hard disk can significantly improve performance.

Spanning virtual memory across multiple disks or simply placing the pagefile.sys on another, less-used disk will also allow Windows to run faster. Just ensure that the other disk is not slower than the disk pagefile.sys is currently on. The more physical memory a system has, the more virtual memory will be allocated.

Using the Ipconfig Command-Line Utility Another important tool for DNS resolution problems is the Ipconfig utility, the same utility used for common TCP/IP issues. There are several key functions that Ipconfig offers with regard to […]

The Impact of DNS on AD DS Problems with DNS can spell disaster for an Active Directory environment. Because all servers and clients are constantly performing lookups on one another, a break in name-resolution service […]