Application pools configured with different modes can run on the same server machine. You can specify the mode for an application pool by configuring the Managed Pipeline Mode setting in IIS Manager.

To use IIS Manager to configure the ASP.NET processing mode for an application pool, perform the following steps: 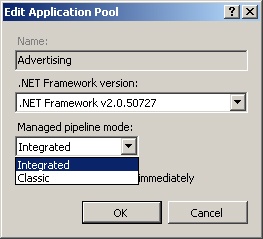 Figure 1 shows ASP.NET request processing in IIS 6.0. In IIS releases up to version 6.0, ASP.NET connects to the Web server as a stand-alone application framework. In these releases, ASP.NET is implemented as an IIS Internet Server Application Programming Interface (ISAPI) extension. 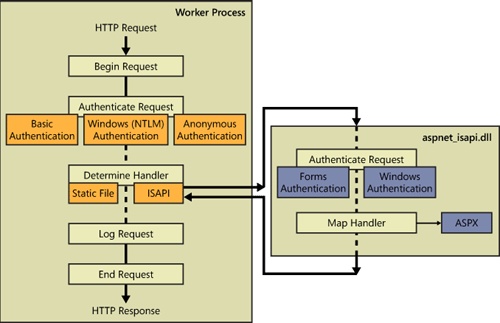 In IIS 6.0, the ASP.NET ISAPI extension (aspnet_isapi.dll) is responsible for processing the content types that are registered to it, such as ASPX and ASMX. For those requests, it offers powerful features, for example, Forms Authentication and Response Output Caching. However, only content types registered to ASP.NET can benefit from these services. Other content types—including ASP pages, static files, images, and Common Gateway Interface (CGI) applications—have no access to these features at all.

A request to an ASP.NET content type is first processed by IIS and then forwarded to aspnet_isapi.dll that hosts the ASP.NET application and request processing model. This effectively exposes two separate server pipelines, one for native ISAPI filters and extension components, and another for managed application components. ASP.NET components execute entirely inside the ASP.NET ISAPI extension and only for requests mapped to ASP.NET in the IIS script map configuration. Requests to non-ASP.NET content, such as ASP pages or static files, are processed by IIS or other ISAPI extensions and are not visible to ASP.NET.

In addition, even for ASP.NET resources, certain functionalities are not available to ASP.NET because of run-time limitations. For example, it is not possible to modify the set of outgoing HTTP response headers before they are sent to the client because this occurs after the ASP.NET execution path.

In IIS 7.0 in Classic mode, ASP.NET requests are also processed using the ASP.NET ISAPI extension, as shown in Figure 2. The core Web server in IIS 7.0 is fully componentized, whereas in IIS 6.0, it is monolithic. However, the ASP.NET requests in Classic mode are processed by asnet_isapi.dll in the same way as in IIS 6.0. After the request has been processed by asnet_isapi.dll, it is routed back through IIS to send the response. 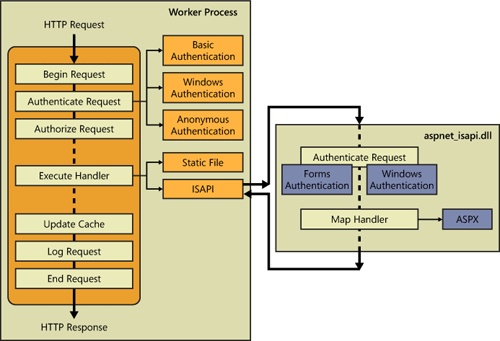 Classic mode in IIS 7.0 has the same major limitations as ASP.NET processing in the IIS 6.0. In summary, these limitations are as follows:

When an application pool is configured with .NET Integrated mode, you can take advantage of the integrated request processing architecture of IIS 7.0 and ASP.NET.

In IIS 7.0, ASP.NET run time is integrated with the core Web server. The IIS and ASP.NET request pipelines are combined, providing a unified (that is, integrated) request processing pipeline that is exposed to both native and managed modules.

The IIS 7.0 request processing pipeline is implemented by the core Web server engine. It enables multiple independent modules to provide services for the same request. All of the Web server features are implemented as stand-alone modules. There are over 40 separate native and managed modules. Each module implements a particular Web server feature or functionality, such as logging or output caching.

Native modules are implemented as dynamic-link libraries (DLLs) based on public IIS 7.0 C++ extensibility APIs. Managed modules are implemented as managed .NET Framework classes based on the ASP.NET integration model in IIS 7.0. (IIS 7.0 has integrated the existing IHttpModule API for ASP.NET.) Both of these APIs enable modules to participate in the IIS 7.0 request processing pipeline and access all events for all requests.

An IIS 7.0 integrated request processing pipeline is shown in Figure 3. A pipeline is an ordered list consisting of native and managed modules that perform specific tasks in response to requests. When a worker process in an application pool receives a request from HTTP.sys, the request passes through an ordered list of stages. As a result of processing, the response is generated and sent back to HTTP.sys. 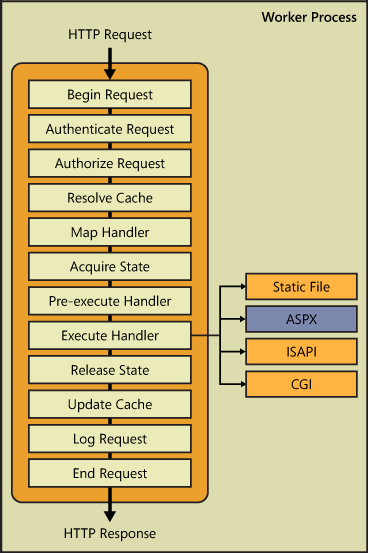 Most of the pipeline events are intended for a specific type of task, such as authentication, authorization, caching, and logging. The following list describes stages and corresponding events in the request processing pipeline: 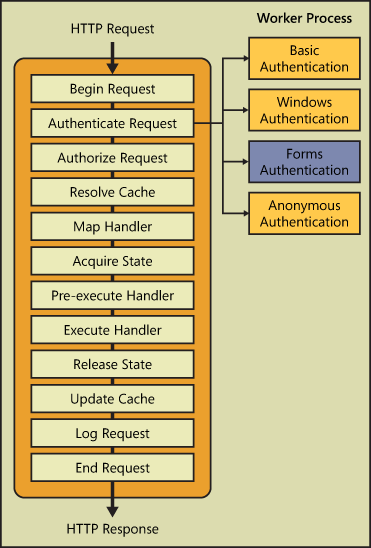 Figure 4. Native and managed modules in the integrated processing pipeline.

How ASP.NET Integration Is Implemented 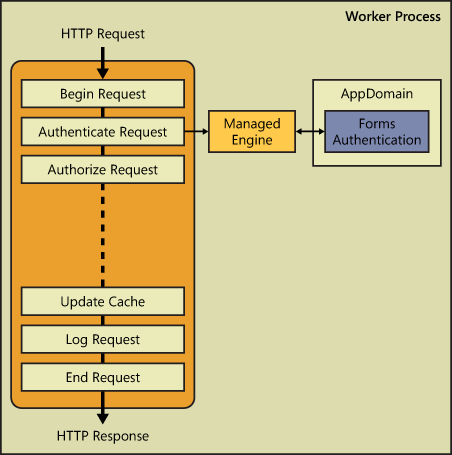 You can manage both native and managed modules using the Modules feature in IIS Manager.

The server uses the sequence of modules list in the <modules> configuration section to order module execution within each request processing stage. By executing during the relevant stage, the majority of modules automatically avoid ordering problems. However, multiple modules that execute within the same stage may have ordering dependencies. For example, the built-in authentication modules that run at the Authenticate Request stage should be executed in the strongest to weakest order so that the request is authenticated with the strongest credentials available.

To manage ordering dependencies, the administrator can control the ordering of modules by changing the order in which they are listed in the <modules> section. This can be done, for example, using the Modules feature in IIS Manager.

To view, and optionally change, the ordered list of modules for a server, perform the following steps: