For those unable to accommodate the mighty Kronzilla valve amplifier, KR Audio offers something more domestically acceptable in the form of the KT88-equipped VA880

While the resurgence of vinyl is becoming a more and more familiar story, there is another area of the audio industry that’s equally buoyant: the rebirth of the valve amplifier. There is ample choice for the prospective buyer at all price levels, and the KR Audio VA880 sits perfectly in the middle ground – not too small and feature-limited, but equally not too big, exotic or priced permanently out of reach.

KR Audio will be a familiar name to readers thanks to John Bamford’s review of the jaw-dropping Kronzilla SXi. This unit is a real labour of love, featuring unique valves designed by the company itself, but its size and price will restrict it to a lucky few. The VA880 is, however, an altogether more practical proposition, as it’s based around the well-proven, and popular, KT88 valve. 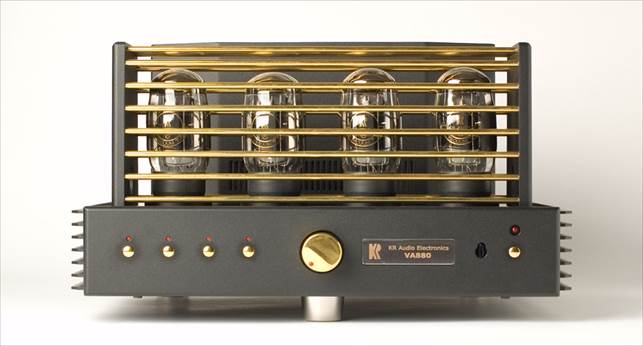 The $8,600 UK price tag sported by the VA880 pitches it somewhat above the price of many well-known valve models by the likes of Ming Da, Icon Audio and Prima Luna, but it does have some competition, including models boasting 211, 300B and 845 valves from Melody, plus the KT120- equipped Jadis I35.

The amplifier itself is a neat design and, while not abounding with stylistic flourishes or undue bling (thank goodness!), it is a beautifully made unit and the matt finish of most of the metalwork lends it an undeniable ‘brutalist’ charm. 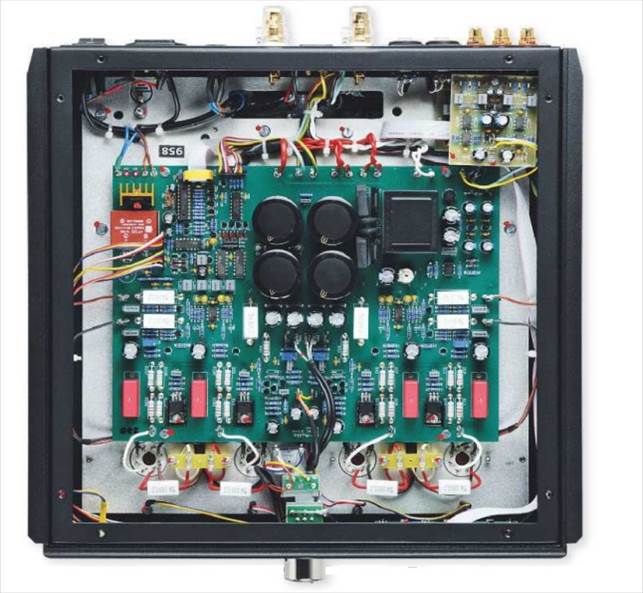 With the power and output coupling transformers encased in a steel box above, KR Audio’s logic-controlled inputs, PSU smoothing, FET driver amp and volume are housed beneath

Front panel controls are limited to four unlabelled source selection switches that relate to the corresponding range of inputs on the rear panel. At the right-hand end is a fascia standby switch that operates in conjunction with the main power switch on the rear panel. The remote control window and centrally placed volume control complete the picture.

At the rear, things are a little more crowded, with inputs via three pairs of phono inputs and one pair of balanced XLR sockets – all analogue. Input selection is achieved using reed relays and the signal is subsequently fed into a Class A MOSFET driver section and on to the variable-bias tube output stage.

The topology of the amplifier is the opposite to the common idea of a hybrid design, which usually involves a thermionic preamplifier driving a solid-state power amplifier. However, as is so often the case in audio, it’s less a matter of how it’s done, but more how well it’s done, and so the apparently topsy-turvy layout of the VA880 should in principle offer no issues, especially coming as it does from a company that knows its power valves. 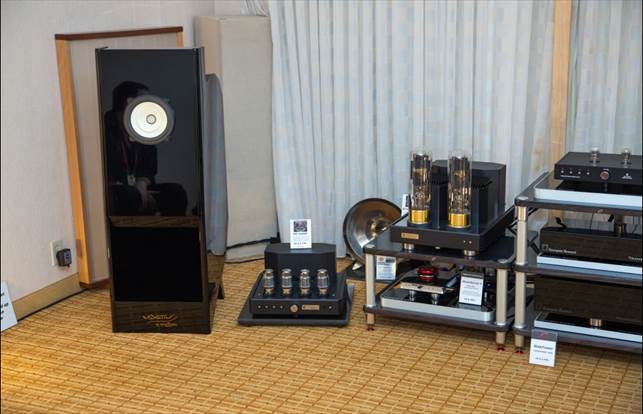 On the output side of things, settings for 4ohm and 8ohm loudspeakers are offered, but rather than simply fitting different binding posts for each, KR Audio has chosen to equip the VA880 with a single set of posts per channel. So it is necessary to remove a small panel on the amplifier’s rear and redistribute four small screws underneath according to the guide on the underside of this panel. While this is not a problem in itself, my one small concern was that the 4ohm setting uses four screws, but the 8ohm setting only requires two. I’m sure I am not the only person that can foresee those two extra screws having disappeared the very day one purchases a new pair of loudspeakers and finds a need for them!

A small, nicely made remote control handset is supplied with the amp, and this is a boon as the metal volume knob on the fascia is right under the output valves and becomes quite hot after some hours’ use.

A sense of purpose

Operation of the VA880 is simplicity itself – once switched on at the rear, the front standby switch is pressed and its associated LED lights up. The unit enters its warm-up phase and, when the LED in the volume control comes on a minute or so later, the amplifier – as the manual puts it – ‘will be ready for your listening enjoyment’.

With the KR Audio VA880 thoroughly warmed up and run in over a period of a week or so, I commenced my listening enjoyment using the Netherlands Philharmonic Orchestra’s recording of Ravel’s Bolero [TACET L207] conducted by Carlo Rizzi. This LP is cut in reverse so that it plays from the inside to the outside of the disc and, as a result, the dynamics at the end are better accommodated. 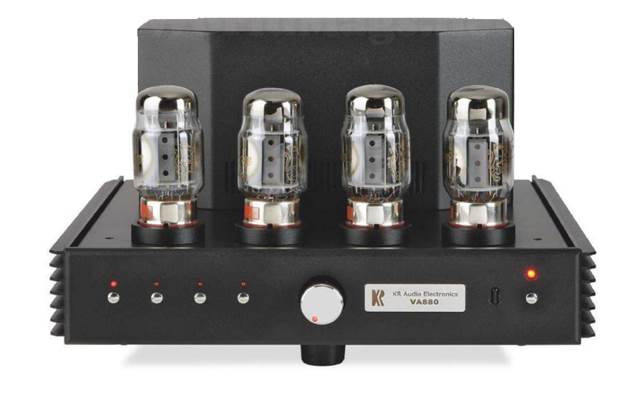 The VA880 absolutely lapped this up and its abilities with regard to instrument tonality and placement within the soundstage were really first-class. Each orchestral element had real form and a sense of purpose to its performance, with the trombone in particular an absolute delight. The KR Audio’s fine insights combined with the one or two extra ‘cheeky’ notes added by the player meant that the whole spectacle raised a virtually continuous smile.

The piece was rounded off by the impressively dynamic timpani ringing out through my listening room with weight and solidity, albeit slightly lacking the last ounce of impact and tautness that I am used to with my resident Naim Supernait.

Where the VA880 really does score, however, is when it comes to the whole combination of midband delicacy, insight and expansiveness. All too often, with some of the cheaper and less capable valve amplifiers that sit below the KR Audio, there is usually a trade-off between these. 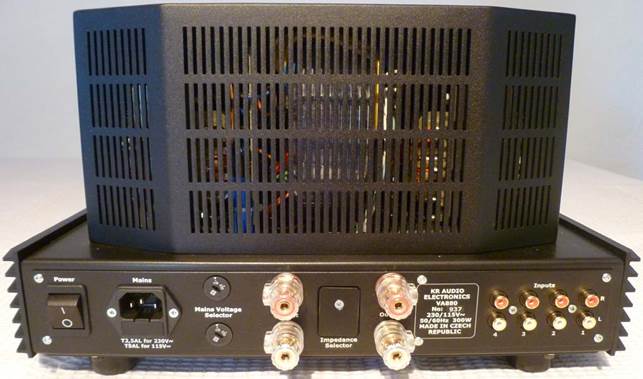 Four line-level inputs are offered, three unbalanced and one balanced. The cover between the speaker terminals hides loudspeaker impedance adjustments

Yes, you can have that lovely sense of spaciousness but maybe you have to forgo insight: not so with the VA880. It has a thoroughly captivating way of pushing the main detail elements of a piece of music right to the fore, but at the same time making sure that everything else around it is just where it should be. It has an inherent ‘rightness’ to its presentation.

The good feeling with regard to detail led me to load up my CD player with Vanessa Rubin’s New Horizons CD [RCA 07863 67445-2]. Ms Rubin has an absolutely glorious voice: soulful and passionate with copious emotional depth. The VA880 showcased this perfectly on the track ‘If My Heart Could Speak’. Not only were the vocals sublime but the backing acoustic bass seemed to be coming right from the corner of my room, so lifelike was the rendition. More heartening was that its less frenetic performance gave the KR Audio time to really pick up on its inherent sonic character, and present it superbly without any bloat or uncertainty.

No fluff up top

At the top end, the VA880 is taut and detailed but with a consistent underlying sense of creamy smoothness. A common misconception regarding valve amplifiers is that they’re a bit mushy and fluffy in the treble department but the KR Audio amplifier dispels this notion in a heartbeat.

It has a clarity that would shame many supposedly ‘crisp’ transistor designs but without any of the associated hardness and spit that some can suffer. This was showcased perfectly by London Grammar’s If You Wait album [Metal and Dust MADART1LP] where Hannah Reid’s glorious vocals positively soared, yet the backing drum machine effects on tracks such as ‘Strong’ were vivid and well positioned within the mix. 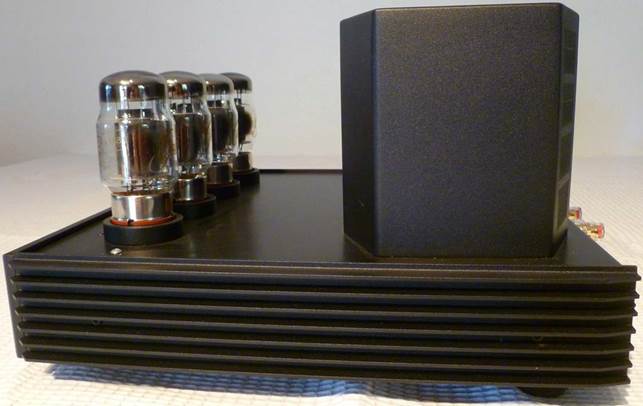 The more I played the VA880, the word that simply would not leave my mind as I listened was ‘sophisticated’. It is more than possible to enjoy cheaper valve amplifiers for the things they do well but, occasionally, a piece of music comes along and spotlights their shortcomings rather blatantly. This never came even close to happening with the VA880, which has an inherent sense of competence and assuredness that meant it virtually never put a foot wrong. Instead, it approached music-making with a quiet confidence and endowed everything I fed it with poise, emotion and breathtaking clarity.

Of course, delicacy and mellifuousness are all very well, but sometimes fare that’s a little grittier is called for. For me, it was the 12in single of Killing Joke’s ‘Love Like Blood’ [EG Records EGOX 20] and there were no obvious issues here either. Geordie Walker’s chunky guitar chords that underpin the song were thick and menacing, and the backing drums offered genuine impact and punch.

I did occasionally feel that the VA880 was tripping over itself ever so slightly in order to keep up with the bass line, but my PMC loudspeakers are particularly ruthless in this respect – which may not have helped. Importantly, the performance of this amplifier was always pithy and always engaging.