In the last decade or so, Microsoft has worked diligently to provide ways for programmers to gain access to the internal functions of commercial applications such as Word and Excel and of Windows itself. The approach is based on a technology called the Component Object Model, or COM, which lets a properly designed program share its data and functional capabilities with other programs—any other programs, written in any other programming language. If you’ve ever written macros for Word or Excel, you’ve worked with scripting and COM. One product of these efforts is Windows Script Host, or WSH, which provides a fast and easy way to write your own management and utility programs. Scripts have an advantage over batch files in that they can perform complex calculations and can manipulate text information in powerful ways because you write them in a full-featured programming language.

Scripts can massage, digest, and manipulate text files and data, view and change Windows settings, and take advantage of Windows services through COM objects provided as a standard part of Windows. In addition, if you have COM-enabled applications such as WordPerfect, Microsoft Word, or Excel installed, scripts can even enlist these applications to present information in tidy, formatted documents and charts.

In addition, you can download and install scripting support for other languages. If you have a UNIX or Linux background, for example, you might want to use the Perl, Python, or TCL scripting languages. You can get free WSH-compatible versions of these languages at www.activestate.com.

If you are already versed in one of the scripting languages I’ve mentioned, by all means, use it. If you don’t already know a scripting language, VBScript is probably the best one to start with because you can also use it to write macros for Microsoft’s desktop applications.

Just like batch files, scripts are stored as plain text files, which you can edit with Notepad or any other text file editor. To create a script file, choose a descriptive name, something like WorkSummaryReport perhaps, and add the extension that corresponds to the language you’ll be using. A script written in the VBScript language must have its filename end with .vbs.

As an example, I’ll write a script that I’ll call hello.vbs. If you want to try it yourself, the steps are 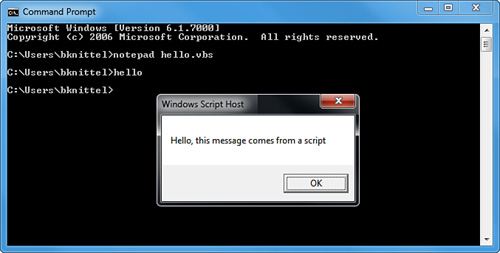 (Notice that the slashes are doubled-up in this command.) Now, type the command hello again. This time the script’s output should display within the Command Prompt window.

WSH comes with tools to examine and modify drives, folders, and files. Here is an example of a VBScript script that performs a reasonably useful task:

It displays the amount of free space on each of your computer’s drives. Type this script into a file named freespace.vbs in your batch file directory, and then type the command-line command freespace. On my computer this prints the following:

Windows Management Instrumentation (WMI) is a system service that provides access to virtually every aspect of a Windows computer system, from the hardware components up to the highest-level system services. For some components, WMI provides information only. Other components can be changed, and thus, as its name implies, WMI can be used to manage the system. You can use WMI to start and stop system services, monitor and stop applications, create drive mappings, share folders, and, with the appropriate updated WMI drivers installed, even manage system services such as Internet Information Services, Microsoft Exchange, and the Domain Name Service on Windows Server.

The following script lists the status of each system service installed on your computer. This script file can be named showservices.vbs. (The underscore at the end of some of the lines are part of the script.)

On my computer, the first few lines of output from this script look like this:

Remember, too, that as command-line programs, you can redirect the output of these scripts into a file. The command

puts the service list into file listing.txt, just as if showservices was a native Windows executable program.

Any disruption in connection with the DHCP (Dynamic Host configuration Protocol) Server with the client computer can result in a failure to acquire an IP address. This results in what is known as APIPA (Automatic […]

There are a number of browser add-ons and applications that offers a graphical user interface for downloading YouTube videos in Linux based operating systems. However, downloading a YouTube video from the command line can also […]

Nslookup is a network administration command-line tool used widely by system and network administrators for querying the Domain Name System(DNS) to obtain domain name or IP address mapping for a specific DNS record. Resolver is […]