Angry Bird Space – They are back (Part 1)

This ice cube colored and shaped bird is a brand new addition to the flock. Ice Bird is an extraterrestrial that seeks the aid of the flock in order to capture an item called the Eggsteroid. Not much else is said about this mysterious bird, and his background is kept a secret. Ice Bird has the unique ability to smash into structures and freeze them solid. There is not a lot of information regarding what this power will do, but a combo attack with The Blues would make the most sense. 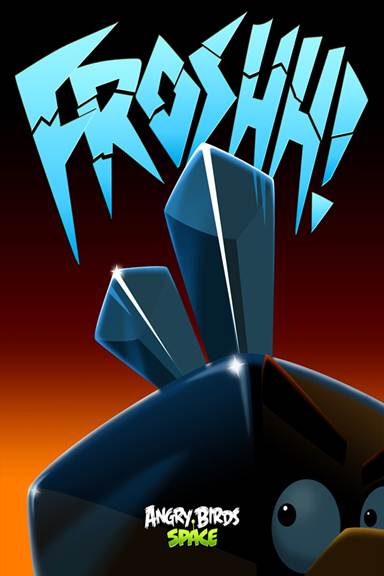 Fat Pig is a brand new “weapon” unleashed by the evil pigs. This gigantic and ravenous creature is nearly six times the size of a normal pig and is a solid line of defense. It is said that the Fat Pig combs the universe, looking for anything and everything to help sustain its immense appetite. This is surely going to be a formidable foe for the flock. Developers did not release if Fat Pig will have any special powers or if he is as easy to “pop” as the other pigs. Judging by his size, I think it’s safe to say that this guy is going to be hard to take down.

Obviously, things are going to look much different since you’ll be playing outside of Earth. The environments in Angry Birds Space are quite possibly the most impressive that we have seen Rovio create. You’ll go on a variety of missions that will take you across the universe. Along the way you will get to see a multitude of “planets” and “asteroids” each with their own unique style and artistic flair. There are even creations like satellites and “asteroid fields.” Sometimes piggies won’t even be positioned on a given planet or hard service, but will simply be floating in space, encompassed in a little bubble.

There isn’t much information pertaining to what types of planets we will see and if there will be any specific elements tied into these planets as Rovio is trying to keep things a secret. Judging by the screenshots below though, this appears to be a really wide open adventure that will span across all types of areas.

This is perhaps the most discussed subject online right now. Will it be any different playing in space? What can we expect to see in terms of gameplay?

Well, for one, deep space means no gravity. This means that birds will no longer launch upward only to come crashing back down to the ground. A lack of gravity means that birds will launch straight into the direction that they are launched and will continue to progress into the void of space, much like real objects interact under anti-gravity. That doesn’t mean that it’s all “straight launches” across the screen. Certain planets and objects have their own individual gravitational pull. If a bird floats close to this pull, it will circle around the object until it eventually crashes into it.

Because of this unique new style of gameplay, Rovio was able to craft some interesting levels that will provide a challenge for even the most advanced of players. Some pigs are positioned on planets or behind them, forcing the player to fling their birds so that gravity propels them into their target. This is both incredibly intuitive and very imaginative. It is obvious that Rovio spent a lot of time and resources to learn about how objects interact in space, in order to give fans and players the most “realistic” experience possible.

There is a ramped up sense of interaction here between the enemies and the player. Pigs will no longer just make snorting noises and smile or frown. They now do things like sleep, taunt, act concerned, and even squeal whenever they assume they are in danger of being hurt. Rovio wanted to make the experience more personable and in-depth, and they felt that giving the enemies more outward emotion was a good way to achieve this goal. If anything, it definitely makes the game more immersive and entertaining.

In order to appeal to more and more casual gamers, Rovio worked on creating a more intuitive control system. In the previous games you simply pulled back on a bird in order to launch it into air. It was your job to gauge and judge exactly how much force and angle to exert on the launcher in order to get a bird to a specific target. Things are a lot easier to control in Angry Birds Space. Developers added a “dotted line guide” that now shows the angle and distance that a bird will travel prior to it actually being launched. This opens up a whole new world of precise shooting and will appeal to the younger crowd who has a hard time gauging where to launch a bird.

A lot of diehard fans complained that the first three games were far too “easy” to beat. Developers have addressed this complaint in Angry Birds Space by offering a difficult area to challenge seeking players. This area will be called the “Danger Zone.” This zone is full of some of the hardest and most frustrating levels that Rovio has ever imagined. In fact, when discussions were made about how to create these levels, department heads at Rovio simply gave “free range” to their developers. You can be sure that these levels are both sinister and vastly entertaining. If you’re seeking a challenge, then Angry Birds Space is going to give it to you.

We weren’t really introduced to boss battles until the release of Angry Birds Rio. These battles were supremely entertaining and provided a great challenge. Bosses were usually located at the end of a specific chapter of levels, as a final stage. Angry Birds Space is bringing boss battles back. Developers promise that you will fight bigger and smarter piggies at the end of each chapter and even hinted at a mega-boss called the “Space King.” This massive pig comes equipped with a large flying saucer that employs some powerful grabbing claws.

Developers have also included some “hidden bonus levels.” These can be unlocked and played from a special menu. While Rovio hasn’t released what the bonus levels will be about, they did say that they will pay homage to classic gaming. That means that you will get to see the birds and pigs in some retro-styled games that look like they’ve come straight from the 1980s.

Angry Birds Space is gearing up to be a seriously awesome universal adventure. Anyone who’d played the previous games knows that Rovio has really hit it out of the park with this concept. We can expect to see some crazy level designs, some interesting bonus content, and I’m sure we will see slew up updates with new levels and probably some new flock members. Angry Birds Space is available on Apple iOS, Android, PC, and Mac.