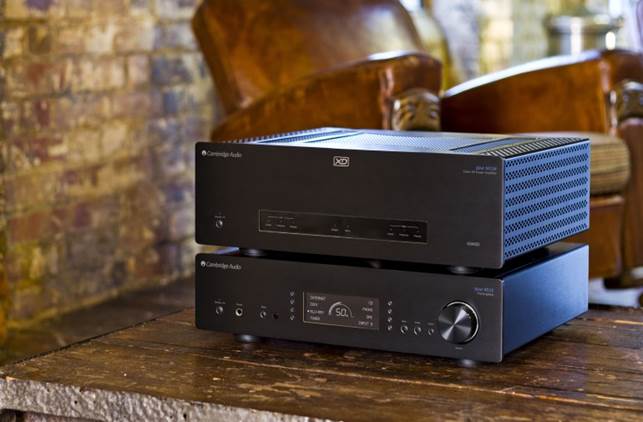 Class A is the sledgehammer approach to eliminating crossover distortion, which is caused by the music signal crossing from positive to negative-going (or vice- versa) and transistors momentarily switching off. In Class A the complementary pairs of output transistors always have sufficient standing current to ensure they remain conducting at all times, but the implementation is costly. Cambridge’s elegant Class XD alternative doesn’t eliminate crossover distortion, it shifts it away from the zero-crossing point of the waveform – hence the name ‘Crossover Displacement’ or XD. Class XD tracks the audio signal and applies a negative bias current, offsetting the position of the crossover point without creating a DC offset. At low signal levels the crossover point is shifted below the maximum negative swing of the audio waveform, yielding all the benefits of pure Class A. At higher signal levels the offset crossover point falls within the negative cycle of the music waveform – there’s the same number of ‘transitions’ but the nature of the distortion is more easily accommodated by negative feedback.

When driving my reference Audiovector Mi 3 Signature floorstanders with a 44.1kHz/16-bit FLAC rip of Jon Strong’s Follow Me, via my Audiolab M-DAC plumbed into the 851E’s balanced input, I was immediately struck by the Cambridge amps’ expansive soundstage. The opening guitar strums of ‘The Judas Kiss’ rang out from well wide of my left speaker and really caught my ear as they resonated with such energy, before falling away with natural decay. Likewise, as the song progressed, the way these amps allowed the drummer’s cymbal crashes to wash across the soundstage was equally striking, and I had the sense that the 851W was having no problems ‘opening up’ my speakers.

But it’s not just soundstage width that these amps have the measure of, it’s how they evenly populate the sonic space they create, well able to control the music under their command. There are many amps that can grab your attention with their cavernous sonic landscapes, but I often find that instruments heard at the soundstage’s boundaries can seem a little lost and acoustically thin, with less body than those placed centre stage. Thankfully this is not the case with the Cambridge combo, and whether presented far afield or between the speakers, each instrument’s sound is equally wholesome.

Stereo imaging is yet another key area where these amps score well. Kristin Hersh’s track ‘Your Ghost’ from her Hips And Makers CD [4AD CAD 4002] allowed the amps to really take control of proceedings and make the speakers virtually disappear, as they brought Kristin’s maudlin vocals to life in my room. What’s notable on this and other material is how these amps manage to make voices sound clean and clear, without making them too clinical or over-exposed.

And the Cambridge Audio 851s impart very little of their own character on the music and nor do they overtly favour any particular musical genre. They pack lots of detail into the music, but they don’t come out ‘all guns blazing’ with it: instead the amps sound confident yet unstressed, no matter how demanding the music and its volume levels become.