Ayre’s VGT methodology certainly imbues the AX-5 with peerless S/N performance, although it’s not entirely without consequence . And while it works flawlessly, the amplifier’s elaborate stepper motor system results in a Heath Robinson-esque ‘clunk’ each time the volume is adjusted – not that you’ll really notice when playing music at enthusiastic listening levels. I soon came to ignore it, although there were occasions when I yearned for finer volume adjustment, finding the 1.5dB steps just a bit too coarse. I’d prefer 1dB steps for sure, as provided in the aforementioned KX-R flagship preamp. 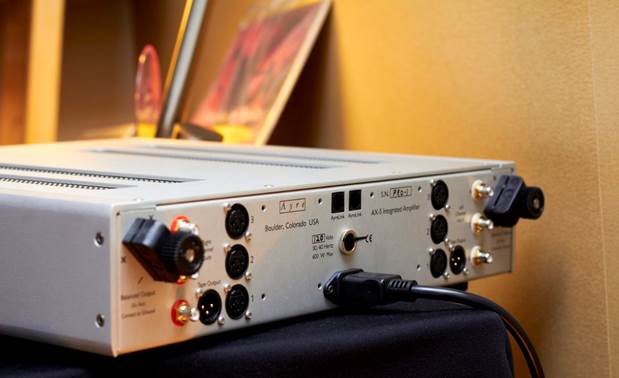 Coarse volume adjustment aside, clearly the design of the AX-5 has been carefully considered. It might be an integrated amplifier with ultra-purist intentions, however it’s far removed from the old-fashioned concept of utilitarian ‘hair shirt’ hi-fi components. Befitting its price its sculpted aluminium chassis is reassuringly robust and beautifully finished; it sports a large, easy-to-read status display; and microprocessor control allows its six line inputs (four balanced, two single-ended) to be individually enabled and named to match source components.

Gain offset for each input can be adjusted via the setup menu; one of the inputs can be assigned as a processor pass-through; and the amplifier ships with one of Ayre’s lovely RC30 multi-component IR remote control handsets whose large keys are backlit with a fibre optic array that distributes light from a blue LED inside. It’s a joy to operate. 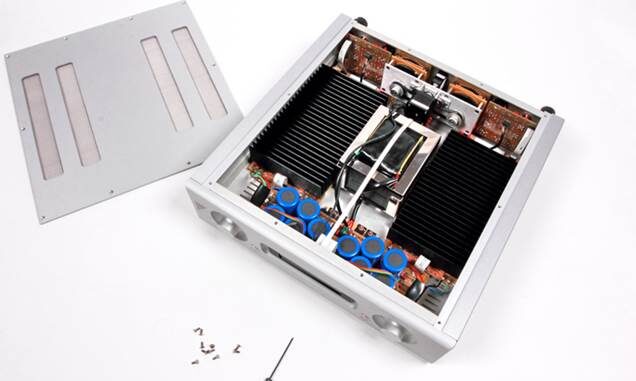 Naturally the AX-5’s front panel display can be dimmed (three intensity levels) or disabled via the handset. However, some enthusiasts might bemoan the absence of a balance control, phase inversion or a mono switch. And if your pride-and-joy speaker cables are terminated with 4mm banana plugs you might not care for the amplifier’s Cardas binding posts, which are designed for spade connectors. I powered up the AX-5, configured one of its inputs to interface with the balanced outputs of my resident T+A DAC 8 [HFN Oct ’12], hooked up with Signal Projects’ Hydra interconnects, and left the amplifier to gently simmer for a couple of days before settling down to critical listening.

Developed in the 1960s by Professor Richard Baker of MIT and patented as ‘A Gateable Bridge Network Having Power Gain’, the Diamond Circuit describes two pairs of bi-polar transistors with their respective emitters and bases tied together. It is commonly used in the output stage of buffer ICs that have unity voltage gain but boost current to drive a load – and in many of today’s DAC chips. Ayre’s Charles Hansen believes that when employed in an amplifier’s output section it simply sounds better than other solid-state push-pull topologies where two phases of a signal are recombined to form a full wave, possibly because the diamond circuit is the only one in which the two half-signals are joined at a single point, with no intervening circuitry. Ayre biases its diamond output section to operate in Class A/B. Says Hansen: ‘I don’t really know why it sounds better… but that is the beauty, the mystery, and the art of audio circuit design. If we knew all of the answers then everything would sound perfect.’

From the outset I was struck by its refreshingly clear and open sound quality. Despite appearing quite luscious and smooth in tonality, easy-going and warmly-balanced, the sound was incredibly detailed: I was hooked.

It proved wonderful at peeling away the layers of heavily multi-tracked rock albums, the AX-5 bringing out low-level details in exhilarating fashion. I was captivated listening to Beneath The Wavesby Kompendium, the darkly romantic concept album penned by Rob Reed, founder of Welsh progressive rock band Magenta [96kHz/24-bit DVD-A; 7 Stones/Tigermoth TMPCD1012], the amplifier providing a sparklingly clean window through which to observe individual elements of the music’s arrangements and myriad production effects. Percussion details were beautifully rendered and natural-sounding, while further down the frequency scale the intense vocals of Steve Balsamo were particularly well projected beyond the plane of my monitors. 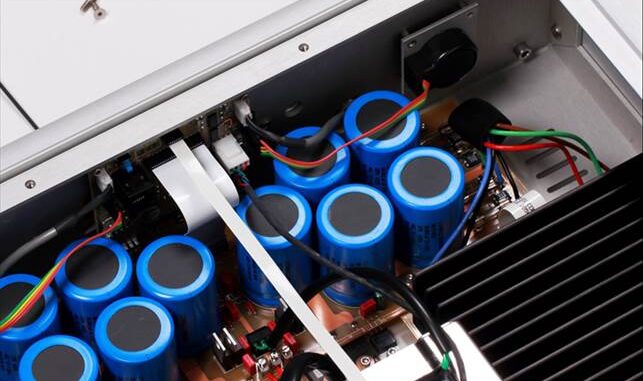 I can’t listen to the guitar break and chord progression in Beneath The Waves’ title track without hearing Don Henley’s ‘Boys Of Summer’ circling in the back of my head, so Henley’s Building The Perfect Beast album came next – Mo-Fi’s ‘Ultradisc II’ remaster [UDCD 705], which is a little more full-bodied and has appreciably sweeter and more pure-sounding highs than the 1984 Geffen issue.

This contains a busy assemblage of electric percussion bouncing between the channels to make up its joyous beat, the song soon deteriorating into a cacophony if not kept in check by a ‘sympathetic’ replay system.

Under the bonnet of this luxuriously appointed, fully balanced integrated amplifier lie some novel design features. Its sound quality is something special as well The amplifier modules are embedded under heatsinks but the most remarkable […]

Meeting the challenge The AX-5 didn’t fully pull its punches to conceal the recording’s shortcomings, leaving me craving a little more upper bass ‘bloom’ to flesh out the track’s stridency. But I was left convinced […]