Towards the end of last year Naim was touting its range of network player hardware as ‘the future of Hi-Fi’, with some justification. There are a number of ways to approach ripping and streaming, and Naim has had most of them covered for a few years now, with its Uniti family of products including CD ripping machines and attractive mini servers. In parallel they have been making digital all-in-one systems for some time, and thus it makes sense that at the lower end of the range they should offer an entry-level stereo streaming all-in-one.

The UnitiLite is that baby of the range, and it definitely ticks all the boxes for digital operation. The only area of functionality which is optional is FM/DAB (which takes the price to the best part of $2,850). Base users get inbuilt UPnP up to the increasingly desirable 24-bit/192kHz level, the ever more important Internet radio, an inbuilt CD player (arguably less important by the day), and a wide variety of front and rear accessible analogue and digital inputs, including a preamp output on Naim DIN sockets should you wish to extend the system. The internal amplifier is rated at 50 watts per channel into 8 ohms.

At its launch at the Milan show last year, a number of hi-fi hacks were keen to ask Naim supremo Paul Stephenson why on earth the company has launching something with a CD player in it. After all, they’re not exactly the cutting edge of technology these days, are they? Naim. Paul conceded this, and said that this system is aimed at precisely these sort of users. Essentially it’s a crossover product, something that works out of the box for those of a non-streaming inclination, but which offers serious streaming functionality for those to whom CD is about as relevant as a Filofax or a telex machine. Fair enough, then!

As you might expect with an all-in-one, there is little but the unit itself in the box – the remote shell differs from the CD5-type and is a satisfyingly chunky little affair. The customary white-plugged Naim mains cable is included, later proving itself to be essential, and there is the usual hinged stub, antenna for wireless operation/ the manual takes the form of a quick start guide and it is all that is needed (if at all) as set-up is self-explanatory and simple.

I attempted to do the initial set-up using the inbuilt wireless and found that for some reason it did not want to see my Apple Extreme/Express based 802.11n and g network, despite the Wi-Fi support being claimed to be b/g/n compatible. I reverted to my common practice of feeding the machine Ethernet from one of the Airport Extremes themselves, but as that could not manage the 24/192 streaming, I moved to a location where I could have direct Ethernet connection.

As is my wont, I also used my usual Power Chord IEC lead as well, an action I was later to regret…

As with the installation, it was possible to get started with music listening on a fairly intuitive basis. The multiple servers in my house were instantly picked up in the UPnP section, and it was easy to start playing. It takes a little while to get used to the remote operation, there is a slight ergonomic conflict with iPod menu operation to overcome. To play something and then continue to navigate menus one does not; menu back’ (that results in the track playing again), but you use the central ‘OK/List’ button.

It was probably my slight frustration with this which leads me to seek out the inevitable tablet operation software almost immediately, and what a joy it was to discover Naim’s N-stream for iPad! Much like equivalent offerings from the likes of Onkyo this is more than just an UPnP controller but a maximum featured, full system controller, meaning you need never rise from your sofa again! 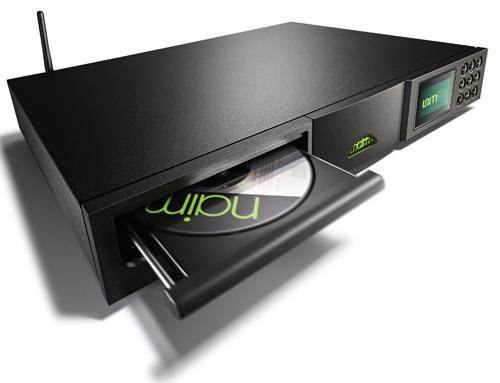 What a joy it was to discover Naim’s N-stream for iPad!

The best part is that Naim has taken the care to integrate the Rovi service (All Music Guide reviews and links) into the playback experience. No longer are you just staring at JPEGs of varying quality representing solely the cover – you can flip it open with your finger to see a multi-page representation of a CD booklet, containing album specific reviews and general biographies, band lineups, and similar artists. You may not agree with some of the reviews or artist comparisons, but the links will have you firing off to the Internet or listening immediately to those similar items in your collection. It is this as much as the audible qualities of the hardware which back up that ‘future of hi-fi’ claim.

Sonically though I was initially unconvinced that the tonal balance was correct, it feeling a little over-egged in the bass direction, and so I reverted to the supplied Naim IEC lead. The difference was astounding, everything snapped back into balance, lending credence to Naim’s assertion that its systems are tuned together right down to the lead that is in the box.

One of the great benefits of the UnitiLite is the step up to 24/192 capability from the Squeeze world of 24/96 limits. Many would say this is a waste of time, but with old top rate stereo DVD-Audio rips and HDTracks increasingly offering analogue masters transferred at the higher sampling rate, the results can be stunning. In the former category, Grover Washington Jr’s Winelight finally has the crystal-clear Latin percussion and thudding Marcus Miller bass to match the original. In the latter category the robotic backing track to Lionel Richie’s Can’t Slow Down fizzes with great timing and Rod Stewart’s seventies solo albums have a marvelous organic analogue warmth to them.

Moving on to 16/44.1 FLAC material, I used the initial segue from Emergency Contraception Blues into Lamplight from Bombay Bicycle Clubs’s debut album to check for correct gapless playback from a Twonky server, a test which was passed with flying color. Musically those compressed washes and the overflowing bass sound of the latter track were marshaled and contained, when it can sometimes just sound like a mess. A similar ability to resolve a musical picture out of a very busy and compressed signal was noted with the 24/96 version of BU2B from Rush’s latest. CD playback was a slight disappointment. Essaying The Proclaimers’ Sunshine on Leith the sound seemed a lot flatter than the same experience via network playback. It was smooth enough alright, but it’s not the core competency of the UnitiLite.